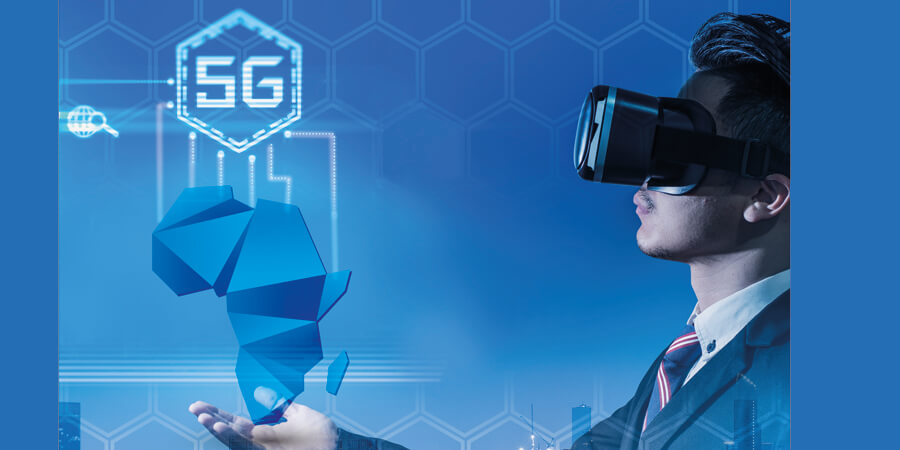 What is 5G? The answer has become pretty simple now. It is a technology that will offer greatly increased bandwidth, dramatically faster download speeds and low latency. 5G networks will enable a long-term digital transformation and contribute to the emergence of smart societies around the world, in addition to setting the foundation for advanced technologies based on the Internet of Things (IoT). Now, as 5G deployment appears on the horizon, Africa, just like any other region in the world, has realized the importance of joining this technological race to leverage its benefits and empower citizens to boost innovation.

The first standard defining a true 5G network has been approved and published in June 2018. Beyond that, 2019 will see the release of the first 5G-compatible smartphones, along with 5G mobile network deployments. By late 2019 or early 2020, operators will adopt the new standard in a very much accelerated pace.

Operators in Africa have already started testing 5G. MTN South Africa has partnered with Ericsson in January and validated the technological prowess of fifth generation (5G) wireless technology in the first demonstration of its kind in Africa. A live feed from a car on a skid pan took place at the Gerotek testing facility in Pretoria, mounting terminals in a vehicle on a live 5G network trial, using 100MHz of spectrum in the 28GHz band. The solution demonstrated, consisted of 3 radio units, baseband equipment, a 5G user equipment (UE) prototype with an external antenna, a vehicle with the UE installed, a 4K video camera and a VR Headset, demonstrating the performance of a low-latency network.

This is just one of the use cases that the partnership has released following the signature of a Memorandum of Understanding (MoU) in November last year. This was followed by the launch of the first 5G trial in Africa in January 2018.

“5G presents an opportunity for operators to improve their existing consumer businesses and address previously untapped value chains in the digitalization of industries. The collaboration between MTN South Africa and Ericsson has led to an exploration of a variety of use cases and applications for digital transformation of industries. These include the automotive, mining, transportation, agriculture, manufacturing and utilities sectors. We are proud to be demonstrating this use case with MTN” says Rafiah Ibrahim, Head of Ericsson Middle East and Africa.

“At MTN Business, we are very excited to have demonstrated our IoT (Internet of Things) capabilities, enabled by 5G technology, to our top tier customers. Using pilots like this, we are not only assessing and preparing our network to roll out 5G in the future, but we are also future-proofing our infrastructure to enrich customer experience and take industries to the next level,” says Wanda Matandela, Chief Enterprise Business Officer, MTN SA.

In addition, mobile operator Vodacom has launched 5G in Lesotho that has started experiencing the very first superfast broadband network in Africa. With this mobile technology, consumers will be able to receive quality services very much similar to that offered by fiber optics.

Knowing that it would be impossible to install fiber optic cables in a non-coastal mountainous country, Vodacom declared that it has obtained a frequency in the 3.5 GHz bands in order to launch its 5G in Lesotho.

“What we’ve accomplished in Lesotho is an example of what can be achieved in Africa, should the required spectrum also be made available,” said Shameel Joosub, CEO of Vodacom in a statement following this giant leap made by Vodacom Lesotho.

However, the head of British African subsidiary of Vodafone expressed in his statement the difficulties encountered in the main market of the company, South Africa.

In fact, Vodacom and its competitors have been urging since 2007 the release of telecom frequencies, thus allowing them to meet the population’s high demand for internet connectivity. However, the South African government has announced that the allocation of new telecom frequencies will only occur in the first quarter of 2019.

Back to July 7, 2018, Vodacom and Nokia successfully tested 5G in the South African city of Durban. This successful experiment which proved the operator’s ability to offer 5G in the country, fueled its impatience to acquire new frequencies for superfast broadband.

IHS Markit has estimated that by 2035, 5G will enable $12.3 trillion of global output and make total contributions to global GDP equivalent to an economy the size of India’s. It also predicts that by 2035, the global 5G value chain will generate output of $3.5 trillion and support 22 million jobs worldwide. This is in part because 5G will boost the competitiveness of local businesses, allowing Africa to compete regionally and on a global level.

Unlike legacy networks, the technology will enable much greater access to big data sets and the capacity, speed and reliable connections needed to realize the UN’s Sustainable Development Goals on a national and regional basis. Innovative uses of 5G in healthcare and education will help educate the 60% of African teens between the ages of 15 and 17 who are out of school and will extend the reach of healthcare workers to a continent where only 3% of the world’s health workers reside.

There are many differences in connectivity between and within African cultures, and there is a great fear that 5G will increase the gap between the more advanced and the less developed. However, Abdoulkarim Soumaila, Secretary General, Africa Telecommunications Union, said in his keynote address at ITU Telecom World 2018, that the key is to make the industry take the time to provide what African end users want and at affordable prices.

“The question is how to use these technologies in application for development. We have to show the end of the application, not the technology of whatever generation it may be,” he said. For governments and policy makers, the point of 5G networks is not so much the technology itself, but its application in terms of innovative concrete use cases – be this tackling malaria, reducing the cost of transport or increasing commercial opportunities for local fishermen.

Industry experts believe that there’s no reason why Africa should lag behind in terms of 5G deployment, with some conditions and measures taken into consideration. Partnerships are one of them. It is important to enhance intersectoral alliances and not only public-private partnerships. Stakeholders have to accept the fact that there are roles of different technologies and different sectors are complementary. Operators should be able to share the infrastructure and adopt a holistic approach to avoid deepening the digital gap.

For Ravi Suchak, VP; Public Affairs – EMEA, American Tower Corporation, 5G will drive the fourth industrial revolution and have a profound impact on us all. The new capacities of 5G –including access to big data sets, capacity, reliability, latency and speed – “will fundamentally transform societies and industries.”

Some argue that 5G deployment is premature in Africa given the continent’s arguably more pressing needs for access to water, healthcare, electricity and education, amongst others. Suchak pointed out that such needs are the very reason why we need connectivity – and 5G in particular – in Africa “to provide a platform for basic human needs, uplifting economies and spurring innovation.” And across the African continent, “the lack of legacy infrastructure, large youth demographic and social and economic aspects create the environment for radical innovative solutions ripe for 5G.”

The transition and transformation won’t be easy or fast because they require development, resources and investment. 5G deployment might be challenging in areas with regular power outage for example. Therefore, there’s a need to adopt the best practice that involve smart partnerships, new investment in infrastructure and flexible regulatory system.

Increased bandwidth, reduced latency and speed will bring a multitude of new use cases to market rather than just one that is why it is crucial to define the right use cases. According to Marc Vancoppenolle, Global Head of Nokia Government Relations, Nokia Solutions and Networks, “for emerging markets, it is important to understand that with 5G, the total cost of ownership of the network is far lower than with previous technologies, so it makes sense for many operators to move there” and then benefit from the new apps that will be available.

Dr. Mohamed Madkour, vice-president of Wireless Networks Marketing & Solutions at Huawei Technologies, said, during the ITU Telecom World that was held in Durban last September, that collaboration is key for Africa to leapfrog earlier technologies and move straight to 5G, and the industry needs to transform.

“Vendors need to deliver solution agility, with solutions that can be replicated in an automated and efficient way; investment entities need to have the courage to come to Africa; and governments need to take responsibility for orchestrating the whole environment”, he said.

Africa is not quite there yet

However, many believe that in spite of all the efforts undertaken by operators and vendors in Africa, the continent won’t be able to catch up with the developing countries and will take a long time to finally deploy the technology.

Recently, it was MTN’s CEO Rob Shuter that confirmed this statement saying that Africa isn’t yet ready for next-generation 5G network, but will be probably in five years from now. He said, “This is the technology that would be used for very specific cases. It would not be a technology for everybody because most people don’t need it; your phone works fine on just 3G. You also need the equipment itself. So right now there are no 5G handsets and even the routers that can receive 5G network are very few and very expensive.”

“What we are doing now is to learn from the technology and get our network ready for it but I think 3G is much more relevant in most of our markets”, he added.

Another area of concern is the security aspect. Investing in cybersecurity is of an utmost importance to enable the development of digital technologies. Several initiatives were launched to protect African businesses from cyberattacks, but further investment seems mandatory in the digital age to leverage the benefits of new technologies, including 5G.

Whether 5G will be deployed soon or in five years, work has already started and in order to pursue the path to success, some conditions should be fulfilled. Investment in infrastructure is very important, while keeping in mind the need to be suspicious of investment terms that seem too generous or that accrue to a far-away sovereign power. And it’s not only about investing but also attracting investment to the country that can serve as a testbed for 5G technologies and use cases.

The world is getting ready for 5G. Every country, including in Africa, has its own perception of the technology depending on its different priorities, needs and status. The challenge now lies in proving to the world that the African continent is capable of rolling out 5G, even if it was at its own pace.