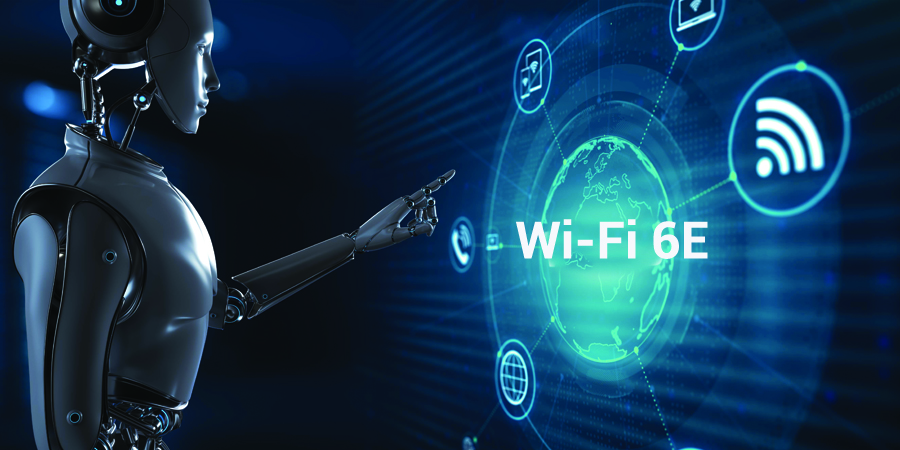 Wi-Fi 6E is an extension of Wi-Fi 6, a technology that holds a lot of promises, designed for crowded multi-device networks. The ‘E’ in Wi-Fi 6E stands for ‘Extended’. Currently, Wi-Fi operates on two bands: 2.4GHz and 5GHz. There are many similarities between Wi-Fi 6 and Wi-Fi 6E, but the most important distinction is the 6 GHz band that has been added.

Wi-Fi's popularity has increased, but the limitations of these spectrums have increased as well. As Wi-Fi 6E devices come to market, everyone will be able to take advantage of the benefits that Wi-Fi 6E has to offer. However, many may experience some delays, depending on which country in the world they are located in.

There are a number of ways Wi-Fi 6E can be used; it supports the 6GHz spectrum and offers faster wireless speeds and lower latencies. However, to benefit from these functionalities, a new router and Wi-Fi 6E-compatible devices are needed to tap into those new airwaves.

As for Industrial IoT, Wi-Fi 6E has the right combination of spectrum and features to enable the next generation of IoT.

Wi-Fi standards have usually been pretty confusing. These ways have been established by the Institute of Electrical and Electronic Engineers (IEEE), and have been certified by the Wi-Fi Alliance, which currently has 866 member companies, including Facebook, Google, Intel, Microsoft, Qualcomm, and others.

It all started when the Wi-Fi Alliance realized that a standard named “IEEE 802.11ax” might be easier to hold if it was rebranded as “Wi-Fi 6”. As a result, “IEEE 802.11ac” is now known as “Wi-Fi 5”, “IEEE 802.11” became “Wi-Fi 4”, and the list goes on. Each of these standards contain a range of new features and improvements. As an example, Wi-Fi 4 introduced MIMO, Wi-Fi 5 products introduced MU-MIMO and Wi-Fi 6 improved MU-MIMO while also introducing OFDMA, thus enabling a single transmission to deliver data to multiple devices at once.

Currently, overcrowded airwaves limit the potential of Wi-Fi, so it is no surprise that many countries such as Brazil, Morocco (first country in Africa to have authorized it), UAE, and Saudi Arabia have already acted to open the 6 GHz band for unlicensed Wi-Fi use, or are considering doing so such as Tunisia, Qatar, and Egypt.

According to a study conducted by Dr. Raul Katz and Fernando Callorda, in South Africa, increasing access to the Wi-Fi 6E - 1200 MHz band would result in a cumulative economic value of $34.81 billion from 2021 to 2030. It will also bring $13.332 billion to enterprises and $9.63 billion to South African consumers. Thus, over the next 10 years, the total input will amount up to $57.76 billion to the South African economy.

In addition, in the case of Kenya, the cumulative economic value and consumer surplus are expected total to $ 14,28 billion between 2021 and 2030, $ 1.12 billion from Kenyan businesses and $ 4.89 billion from Kenyan consumers as a result of license-exempt access to the Wi-Fi 6E technology. Thus, the total contribution amounts up to $ 20.29 billion to the Kenyan economy for the next 10 years.

Existing wireless access devices, client devices and the back end network and cabling infrastructure may need to be upgraded in order to fully support and benefit from today’s Wi-Fi 6E technology. So, here are some key strategies to get the most out of Wi-Fi 6E and help future proof Wi-Fi investments:

Last but not least, should we upgrade to Wi-fi 6E? The answer to this frequently asked question depends on each and everyone. Wi-Fi 6E routers are just starting to hit the market, and like most new technologies, they are expensive to adopt early. By this time next year, prices will likely have dropped considerably, and people will be able to connect a lot more Wi-Fi 6E devices to routers.

It takes the same planning as any other Wi-Fi innovation to deploy and optimize a fast, resilient, and secure Wi-Fi 6E network. Working with trusted technology partners and considering the points outlined above can help in getting the most out of 6 GHz bands, delight users, and have a great Wi-Fi 6E experience.