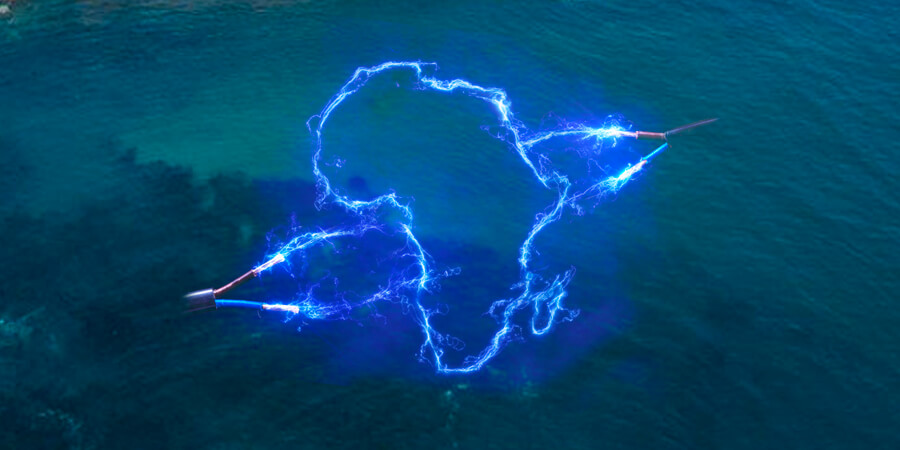 The rise in global internet usage during the Covid-19 pandemic emphasized the need for widespread, reliable connectivity and infrastructure. As of late 2021, there were approximately 436 submarine cables in service around the world. Among the most important components of great connectivity are submarine fiber optic cables or subsea cables, which unfortunately relatively remain in the dark, such as Africa-1 and APCN.

Subsea cables are the global backbone of the internet, connecting people, businesses, and economies around the world. 2Africa is one example; a 37,000 km submarine fiber optic cable system that will interconnect Europe, the Middle East. Its design capacity is 180 Tbps, which will deliver more than the total combined capacity of all subsea cables serving Africa today according to 2Africa’s partner. 2Africa is the first subsea cable project that is designed to serve the whole of Africa, seamlessly interconnecting both the east and west coasts.

Africa Coast to Europe (ACE) submarine cable is another example of submarine cable which has gone live, with connections available at Teraco’s three data centers across South Africa, noting that it’s the eighth submarine cable system to connect at Teraco. The ACE cable system costs a total investment of around U$700 million, with around $250 million financed by Orange group and its subsidiaries. It extends almost 17,000km along the West Coast of Africa and up into Europe, connecting 19 countries, South Africa at its most southern and France at its most northern; 16 out of 19 countries connected are on African soil – and in the case of Equatorial Guinea, Gambia, Guinea, Liberia, Mauritania, Sao Tomé e Príncipe and Sierra Leone, ACE is the first international submarine cable to land on their shores.

Understanding the impact of subsea cables is important for designing the policies and prioritizing the infrastructure investments that will be most effective for growth. Studies estimate that subsea cables and broadband infrastructure investments are among the most effective development policies for Africa’s economic growth. The promise of subsea cables as drivers of economic growth in Africa warrants excitement about the potential economic impact. As an example of these impacts, a study by RTI International in Nigeria, shows that subsea cable landings have resulted in a 7.8% increase in the likelihood of employment (in areas connected to fiber), meaning that for every 1 million people living in areas connected to terrestrial fiber, 78,000 additional people become employed.

Furthermore, in the Democratic Republic of Congo, subsea cable landings increased the chance for people in connected areas to be employed by 8.2% as they also recorded a 19% increase in GDP per capita.

Another example is South Africa which experienced a 6.1% increase in GDP per capita as a result of cable landings, which improved connectivity and catalyzed economic activity. The country also recorded a 2.2% increase in employment in areas connected to fiber infrastructure.

Mozambique, in its turn, experienced a 13.6% increase in employment for urban, university-educated people, especially in Maputo. However, access to fiber infrastructure is limited to a small share of the population, so there are no significant national-level impacts yet.