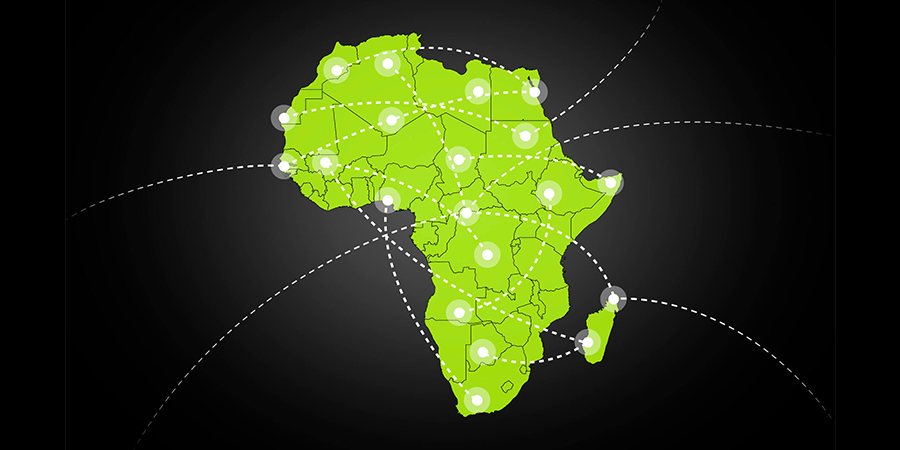 For centuries people have crossed borders to live, work and trade. While cross-border payment systems are crucial for financial inclusion and growth in a globalized economy, cost and efficiency challenges remain, particularly in Africa.

In 2021, Africa accounted for 70% of the total value of mobile money transactions globally. In recent years, the continent has experienced a rapid proliferation of digital instant payment solutions. However, many of these are not interoperable with each other, and even less so across borders. As Africa works towards building the African Continental Free Trade Area (AfCFTA), interoperability of cross-border instant payment solutions will be vital to increasing trade. Furthermore, ensuring cross-border interoperability of low value instant payment systems, notably mobile money, will be an essential step in making sure that the AfCFTA is inclusive, and that its benefits extend to small-scale traders, many of whom are women.

In this context, the latest milestone for the AfCFTA plan is the new interconnected Pan-African Payment and Settlement System (PAPSS) which launched in January this year. It will facilitate cross-border payments, boost intra-African trade and provide expansion opportunities for businesses. This is sorely needed and will significantly benefit Africa’s business ecosystem, but seven months from launch, it’s clear that more needs to be done to ensure it fulfills its potential.

PAPSS addresses the historic challenges of making payments across African borders, adding value through a common African market infrastructure for all stakeholders, from governments, banks and payment providers to corporates, small enterprises and individuals. Participants such as commercial banks, payment service providers and other financial intermediaries connecting to PAPSS can benefit from:

Whereas governments and central banks partnering with PAPSS can benefit from:

Africa is a global leader in financial and telecommunications innovation. However, sub-Saharan Africa remains the most expensive region to send money across borders, adding delays and risk to traders who might otherwise thrive in new markets. Mobile money and the need to reduce the digital divide helped solutions like Central Bank Digital Currencies to emerge. There are even discussions about a single currency for the continent.

“Initiatives such as the Pan-African Payments and Settlement System (PAPSS) and the work of Smart Africa on the Pan African Blueprint already point the way to easier and cheaper payment services within the continent. Six countries within the West African Monetary Zone (WAMZ) - Liberia, The Gambia, Sierra Leone, Guinea, Ghana and Nigeria, are bringing together six central banks and French and English languages,” commented John Bosco Sebabi, deputy CEO, the Pan-African Payments and Settlement System (PAPSS).

“Transactions settled in local currencies have gone through the six central banks currently participating, with about 25 commercial banks in this region signed up,” he adds. “We also have switches on board – a central point where commercial banks are integrated, and the six countries are all becoming our technical connectivity providers.”

The most expensive cross-border payments on Earth

Estimates suggest that some 30 million Africans reside outside the country of their birth with remittance inflows into sub-Saharan Africa alone amounting to around USD$47 billion. Despite massive demand, payment corridors between Africa and the rest of the globe are the most expensive in the world. “With remittances costing an average cost of between 8 and 10 percent of the value of each transaction, almost USD$4.7billion disappears from the continent in expenses which is a significant figure in any context,” notes Dankworth.

He says the success of mobile phone-based money transfer services indicates an appetite in the market for safe and cost-effective ways of transferring money across Africa. “In many markets, the majority of remittances are sent via a physical agent and are usually subject to high transfer fees. Nigeria is an example of a substantial net inflow market (around USD$18 billion flowed into the country in 2021) where residents in the United States, the UK and Europe are looking for transparent and reliable ways to support their families back home.”

Unreliable systems and shortages of physical cash are other frequent challenges to the free flow of money in Africa. Cash to cash services, while quicker than traditional banking methods, often attract high fees and, amid cash shortages, may require recipients to travel vast distances several times to collect the full amount due to them. Very often, the difficulty lies not in sending money, but in receiving it.

Thanks to the number of intermediaries involved in transferring money from one country to another, regulatory challenges prohibit the ease of moving funds. Adding to the complexity is the fact that every country abides by its own regulations, making the cross-border payment system slow and in some instances less secure than digital alternatives.

Towards a seamless cross-border future

There has been a clear acceleration in the demand for online money transfers, as African consumers become more comfortable with digital payment solutions. Technologies such as digital wallets and payment gateways are some of the ways through which fintech is simplifying the complex cross-border payment process while also improving ease of use and convenience for end consumers. Dropping the cost of remittances is where the biggest opportunities in the market now lie. In the African context, it will be vital for customers to feel in complete control of their money and for the solutions they use to be seamless, interoperable and easy to use.