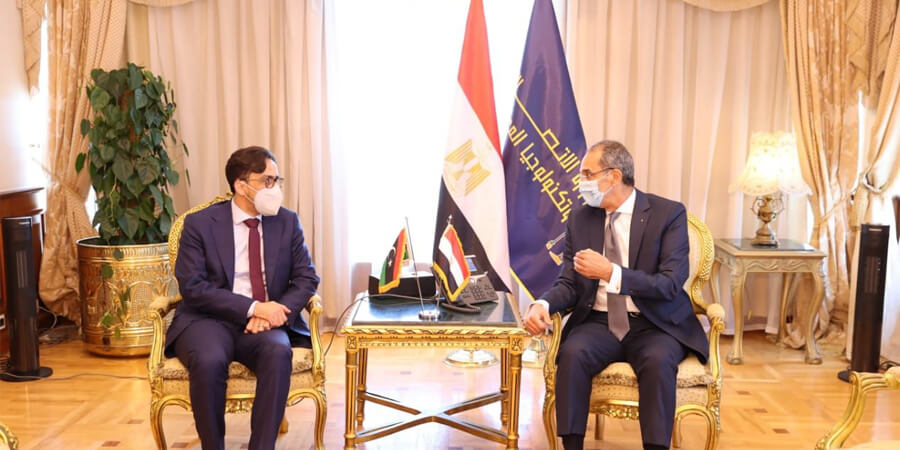 They discussed cooperation between Egypt and Libya in ICT and post, in light of the memoranda of understanding (MoUs) signed by the two countries during the visit of the Prime Minister Mustafa Madbouly to Tripoli, last April.

LPTIC is responsible for supervising the Libyan ICT sector. The company provides advanced and effective services in the field of communications technology, postal services, and IT that support the development of the Libyan economy. The company includes a number of subsidiaries, namely the Libyan International Telecommunication Company (LITC), Hatif Libya, Libya Telecom and Technology, Libya Post, Al Bonya Co. for Investment and Services, and the ICT Academy.

The two sides had an expanded meeting chaired by Talaat and Gergab, and attended by a number of executive leaders from the Ministry of Communications and Information Technology (MCIT), LPTIC and its affiliates. They discussed enhancing cooperation between the two countries in line with the three MoUs signed by Egypt and Libya, two for cooperating in rebuilding the information infrastructure in Libya and benefiting from the Egyptian system of international cables, and one for building capacity and developing technical professional from Libyan youth, in cooperation with the Information Technology Institute (ITI).

The meeting also addressed enhancing bilateral cooperation in digital infrastructure, digital transformation, postal services, capacity building and honing young people’s digital skills in various ICT fields, as well as the cooperation in areas related to the legislative and regulatory structure of the communications sector, and qualifying young Libyans in cybersecurity and in tackling cyber-attacks.

During the meeting, the ICT Minister stressed the importance of close cooperation between Egypt and Libya in light of the historical, geographic and cultural ties that brings the two countries together. Talaat said that during his visit to Libya two months ago, he saw the renaissance that the country was witnessing under the will of the Libyan people and government to achieve that; he stressed that Egypt supports all efforts made by the Libyan government in this regard.

Talaat stated that it was agreed on accelerating the productive cooperation based on common interests between Egypt and Libya in the ICT sector. The two sides agreed on forming a joint team from the two countries to develop a specific plan with topics and a timetable for the implementation of joint cooperation projects in interconnection and submarine cables, as well as digital transformation projects through sharing the Egyptian experience with Libya and benefiting from the successes that Libya has achieved in this field. This in addition to cooperation in developing professionals in ICT through hosting Libyan youth in training courses in Egypt, and establishing training institutes in Libyan cities.

The two sides also agreed to cooperate in promoting entrepreneurship among youth and fostering creative thinking, as well as cooperating in data centers and project management, with studying the possibility of leveraging the Egyptian expertise in project management in Libya and the exchange of visions, success stories and experiences between the two countries in this field.

For his part, Gergab said that he looks forward to establishing expanded economic relations with the Egyptian telecommunications sector. He underlined that Egypt’s participation in Libya’s development journey comes as no surprise, given the political, historical, cultural and social ties between the two countries.

Gergab revealed that it was agreed on carrying out a number of projects of high priority for Libya, during the current and next year. Those projects include benefiting from the Egyptian experience in achieving digital transformation in the state institutions and automating government service operations. It was also agreed on establishing a joint company that supervises the digital transformation in Libya.

Egypt's Ambassador to Libya Tamer Moussa said that there are common factors between the two countries, in light of the historical ties that brings them together. He commended MCIT role in opening avenues for cooperation between Egypt and Libya; stressing that the Egyptian Embassy in Libya will coordinate and support joint cooperation efforts between the two countries in ICT.

From the Egyptian side, the meeting was attended by the CEO of the Information Technology Industry Development Agency (ITIDA) Amr Mahfouz, ITI Chairwoman Heba Saleh, the Director of the National Telecommunication Institute Iman Ashour, the Assistant Minister for Global Information Infrastructure (GII) Mohamed Nasr Eldin, the Vice Chairman for postal areas affairs at the Egyptian National Post Organizations (ENPO) Abdo Elwan, the Senior Vice President and CFO at Telecom Egypt Mohamed Shamroukh, and a number of officials from MCIT and its affiliates.

It is noteworthy that the Libyan delegation is visiting Egypt on June 19-22. The visit is expected to include a number of executive meetings between officials from MCIT and its affiliates, and the Libyan delegation, with the aim to explore closely the ICT projects in both countries and discuss ways to enhance joint cooperation in this field.