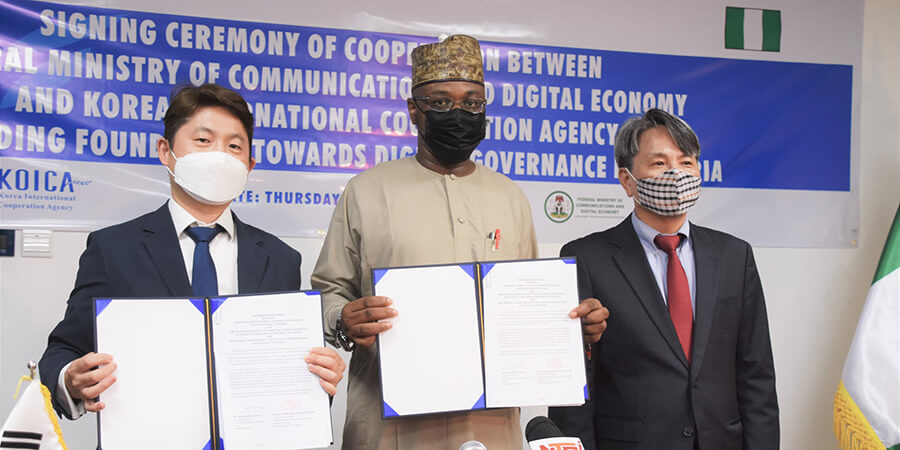 Nigeria’s Ministry of Communications and Digital Economy has signed a new project agreement worth $13 million with the Korea International Cooperation Agency (KOICA) to boost the country’s eGovernment expansion.

In a statement, the KOICA office in Nigeria explained that the new agreement will help the implementation of the ‘Project for Building Foundations Towards Digital Governance in Nigeria from 2020 to 2026’.

It reads, “The project, which is fully funded by the Korean government through grant aid, is expected to enhance capacity for the further execution of key initiatives of the National eGovernment Master Plan, improve competencies for e-government service delivery through capacity building programs, expand the delivery of government digital services through the activation of the government service portal, www.services.gov.ng, and create increased access for NIN enrolment through the establishment of additional NIN enrolment centers.”

Speaking during the signing event, Isa Pantami, the Minister of Communications and Digital Economy, noted that KOICA’s aid disbursement for eGovernment remained the highest in Nigeria. The Minister also acknowledged the willingness of the Federal Government to expand eGovernment in Nigeria and the Ministry’s preparedness in actualizing the objectives of the new project.

Country Director, KOICA Nigeria Office, Woochan Chang, said that the agreement serves as a second phase for the eGovernment Capacity Building project in Nigeria that is earlier implemented during 2013-2019 and was also fully funded by KOICA.

On the other hand, the Federal Government extended the deadline for national identity number (NIN) linkage to SIM data to October 31, 2021.