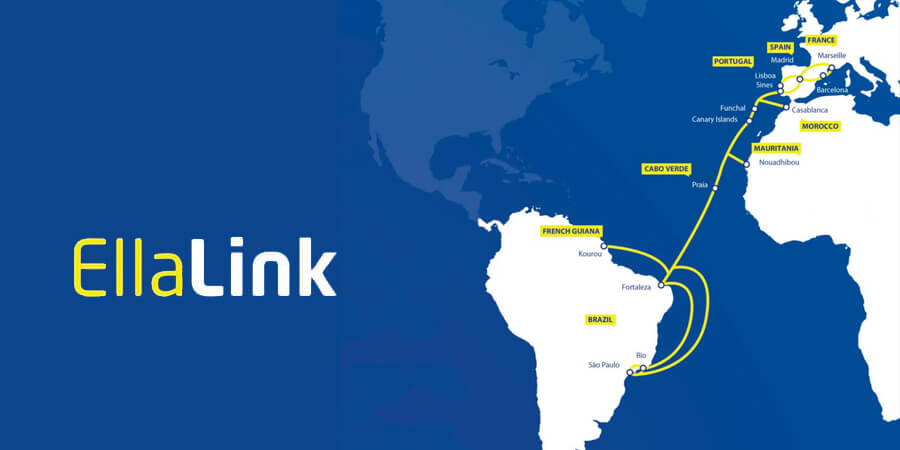 The EllaLink international submarine cable in Praia, Cape Verde, went live. This event comes as the culmination of a project that was born in 2018, when Cape Verde Telecom and EllaLink announced the signature of the contract of agreement to deliver connectivity from Europe and Latin America to Cape Verde. This partnership between Cabo Verde Telecoms and EllaLink has received the support of the European Bank of Investments and the local Government of Cape Verde.

“Thanks to the hard work of the Cabo Verde Telecom teams, the Government involvement, and the European Bank of investment support, this project is now a reality, and Praia is now connected directly and neutrally to Brazil and Europe”, announced Vincent Gatineau, Chief Marketing & Sales Officer at EllaLink, during the ceremony of inauguration of the new cable connection.

This is not the first time that Cape Verde will be crossed by a submarine cable but this time it will be a tremendous step forward. This is because the new cable offers the lowest latency available on the market, as well as great capacity (30Tbps) and bandwidth, which will allow Cape Verde to benefit from a secure and efficient connectivity. Moreover, the EllaLink submarine cable will eventually enable Cape Verde to take control of its own digital destiny, for it will now be connected from Praia to three continents.

The project was launched in 2018, as the country’s need for a secure connection was undeniable and needed answering. João Domingos Correia, Chairman of the Board of Directors of the Cabo Verde Telecom group and CEO of the three companies of the Cabo Verde Telecom group explained, “The increase in capacity in Cape Verde was being driven by the growing needs resulting from the digital transformation going on, by the digitalization of the habits of consumers, and also by what the Covid-19 pandemic “.

However, the benefits of the EllaLink cable’s launching went way beyond the long-needed securing of connectivity of Cape Verde. Indeed, this technological innovation will effectively allow Cape Verde to become a critical digital hub. The country will be able to increase the quality of their service offer to the country, but also extend it to all of West Africa. From early on, EllaLink’s top priority in this project has been to offer a most adapted answer to Cape Verde’s specific needs, and this project fitted almost seamlessly into plans and quest for securing the country’s communications.

According to EllaLink, this project will allow Cabo Verde to overcome large and ancient problems of the country while creating opportunities to develop technologically. The launching of this new EllaLink submarine cable is a major leap forward to stimulate the Cape Verde region’s digital economy and international attractiveness.